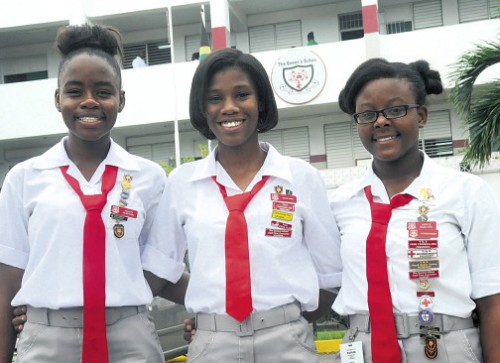 The Queen’s School is without a doubt the # 1 all girls school in the island as we continue to excel in academics, co – curricular activities and sports.

The Queen’s School’s Motto, Virtute et Spaientia Floreat is the latin for “May she flourish in virtue and wisdom”. For most of the girls, The motto gives them a great sense of pride for their school and its accomplishments while for others it is a motivational push for them to do well. But for each girl walks onto the campus we pray “may she flourish in virtue and wisdom”.

The Queen’s School was founded in 1953 when the Synod of the Church of England passed a resolution that a new secondary school should be established. In January 1954, the school was formally opened as a Diocesan High School for Girls with a Preparatory Department for boys and girls.

The school started with fifty-one students, four forms and four teachers in the old Doric Hotel building. The High School was under the direction of Mrs. Anne Chambers with Mrs. S. E. Clarke as Second Mistress. In 1955 Mrs. Clarke took over as Headmistress. Read more …

“May She continue to flourish in virtue and wisdom.”