In 1953 the Synod of the Church of England passed a resolution establishing a school at what had been the Doric Hotel. In January 1954, the school was officially opened by the late Archbishop of York, Dr. Cyril Garbett, on Monday, January 11, 1954 as a Diocesan High School for Girls with a Preparatory Department for boys and girls. The school was named The Queen’s School in honour of the coronation of Queen Elizabeth II who was crowned in 1953. 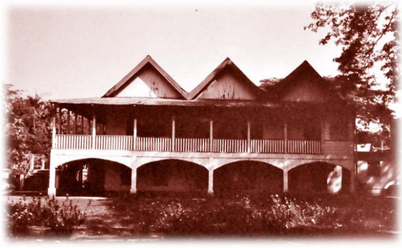 Camperdown Great House later became The Doric Hotel in the 1920s and finally The Queen’s School in 1954. The Administrative Block stands in place of the old Doric Hotel.

The high school commenced with fifty-one students, four forms and four teachers situated on the first floor of the old Doric Hotel building. The school was under the direction of Mrs. Anne Chambers with Mrs. S. E. Clarke as Second Mistress. Mrs. Clarke later took over as Headmistress in 1955. The Preparatory Department was situated on the ground floor and started with twenty-two children and two teachers. Other Past Principals are Mrs. Etheline Aiken (1976-1992), the late Mrs. Yvonne Keane-Dawes (1992-2007) and Mrs. Carole Jackson, Acting Principal (2008-2010). The current Principal, Ms. Jennifer M. Williams, commenced her duties in 2010.

It soon became apparent that the accommodations were inadequate to facilitate the ever increasing numbers. This led to the purchase of 127 Constant Spring Road to house the Preparatory Department. In January 1955 the Preparatory School moved into its new premises. The official opening ceremony was performed in March of that year by Lady Foot the wife of the Governor, Sir Hugh Foot and the school was blessed by the Rt. Rev. Basil Dale, who was then Bishop of Jamaica.

The Queen’s School has grown rapidly. The Hall and four new classrooms were first added, followed by another four classrooms  that were built adjoining them, all adorned by coloured panels of the Queen’s Beasts, painted by then Suffragan Bishop of Kingston, Bishop Lewis Evans.

The numbers in the school continued to grow and there was a continuous building and expansion programme which lasted well into the 1970’s. 1958 was an important year in the history of The Queen’s School and Jamaica as it marked the coming of the Common Entrance Examination. 1958 also marked the opening of the tennis courts, the gift of the Parent Teachers’ Association.

The building which houses the Science laboratories, as well as, and the Cookery, Art and Needlework Rooms were erected in 1959.

The Swimming Pool and Netball Court, again gifts from the Parent Teachers’ Association, were acquired between 1973 and 1978. These facilitates have been expanded to accommodate Volleyball, Basketball, Badminton, Hockey, Softball and Track & Field. The school also competed and won the ISSA Girl’s Championships for the first time in 1978. 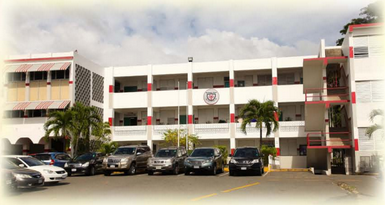 The Administrative Building that replaced The Doric Hotel

The original uniform made from tobralco consisted of a grey square-necked, belted tunic with six gores, a white blouse, red beret, white socks and black shoes. The uniform was later redesigned when the fabric became difficult to source. A polyester blend has replaced the tobralco and the new A-line cut tunic which now has a ‘V’ neck is also embroidered with the School’s crest. The white blouse is worn with rolled three-quarter sleeves; a red tie has replaced the red beret.  White socks folded at the ankles and black shoes are still worn.