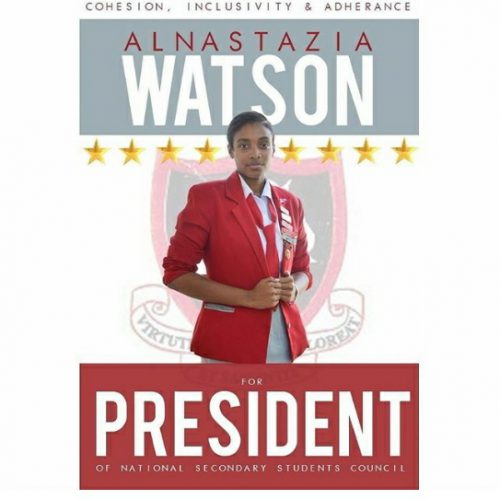 The members of the Debate Team were not only Quarter Finalists in this year’s Burger King National Schools’ Debate Competition, but were named Top Girls’ School in the island.

The Queen Beez, our Cheerleading Team placed 4th in The Jamfit Regional Cheerleading Championships and are poised to take home the GOLD in National Finals to be held at the National Indoor Sports Centre in July! You go girls!

The School’s Cadet Unit placed 2nd in the Annual Inspections held earlier this year. They continue to make us proud, serving in different capacities, from assisting at the GRACE/ISSA Boys and Girls Championships to providing security detail for the President of The United States of America, Barack Obama!!

We beam with pride to have a second student, Amoya Edwards, admitted to the Cadet Flight Training programme. Our first student to have joined the programme, Sion Davis, is nearing the end of her programme at the Caribbean Aviation Centre!

The Queen’s School took this year’s festival by storm and brought home over 30 medals!!!!

For Music, we earned 1 Silver and 1 Bronze Medal…

Ashamoy Blair seen here performing the piece, A Fi Wi Jamaica, went on to represent the school at the National Finals. Ashamoy has also managed to capture the attention the Ministry of Labour and Social Security who invited her to perform for a delegation from St. Lucia at a function held recently, at the Jamaica Pegasus Hotel.

When Nestle Jamaica held its School’s Wellness Intervention, in collaboration with JCDC, Ashamoy was invited to perform once again, at the Knutsford Court Hotel.

Once again, our Senior and Junior Netball Teams did extremely well in the ISSA Netball Competitions. The Senior Team ended in 3rd place and the Juniors in 2nd place.

The Under 14 Netball Competition in currently underway and already our team is poised to do very well!

Abigaile Sutherland and Marvette Anderson lead the Jamaica Under 16 Netball Team to victory in the Caribbean Netball Association Championships held recently. Abigaile served as captain of the team which was coached by our own Netball Coach, Marvette Anderson.

The team did well this year ending in the top 30 of the GRACE/ISSA Boys & Girls Competition. They were recognized by Grace Kennedy, at the Corporate Area Meet for being the most improved team in the competition this season. Special ‘big up’ to Donelle Hartley of second form who placed 6th in the Hurdles and Danika Ferguson of fifth form who placed 10th in the heptathlon.

Taekwondo was introduced to The Queen’s School just this year and already they are making their mark in a significant way! They have made history as the first all-girls school to have a Taekwondo Team and even more spectacular than that is that all the girls medaled in their first tournament held earlier this month. The Team is coached by Past Student Aneek Brown.

The Queen’s School Family wishes to extend special gratitude and congratulations to all the teachers who coached, mentored or otherwise assisted the students in performing so well.